The Necronomicon Spellbook Trilogy combines to form a masterpiece archival library collection of mystical exploration into the heart of the ancient Mesopotamian Mysteries, this complete practical companion to the Mardukite “Necronomicon Anunnaki Cycle” illuminates the revolutionary teachings and source materials of the Modern Sumerian-Babylonian-Anunnaki Tradition of the Mardukite Chamberlains (Ordo Nabu Maerdechai), edited by Joshua Free, the presiding Nabu of the organization since its inception.

NECRONOMICON SPELLBOOK I
The Magan Tablets of Magick & Creation
by Joshua Free
2011 — Year-3 Liber E
The Magan Text… The Enuma Elis… Long thought to be the fantastic concoction of wishful-thinkers, the fundamental basis for the mystical, magical and spiritual tradition born of Ancient Mesopotamia has come to life! Cuneiform tablet records of magick and creation are drawn together to reconstruct the most antiquated, powerful and legendary “magician’s primer” ever known to the minds of men — formulated by the ancient Sumerians and Babylonians! 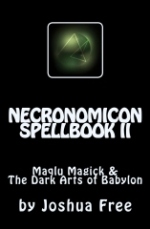 NECRONOMICON SPELLBOOK II
Maqlu Magick & The Dark Arts of Babylon
by Joshua Free
2011 — Year-3 Liber M
The Maqlu Tablets… An authentic “Necronomicon Spellbook” of Mesopotamian Magick drawn from the sands of Babylonia — as known to the Sumerians then reinvented in Babylon — forming a complete Anunnaki (‘alien sky god’) “grimoire” — a complete handbook dedicated to Enki, Marduk and Samas (Shammash) and used by magicians and priests for thousands of years to combat in wizards’ duels, reverse the effects of evil spells and curses, banish disease and nightmares, and conjure the protection and blessings of the gods! 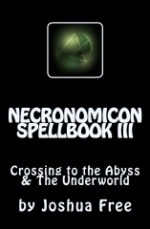 NECRONOMICON SPELLBOOK III
Crossing to the Abyss & The Underworld
by Joshua Free
2011 — Year-3 Liber C
To the Beyond… By whatever names it has been given, the part of this ‘advanced’, ‘esoteric’ or ‘inner circle’ work connected directly to the “Other”, in whatever tradition it is realized from, is the highest part of the ‘Great Work’ – that which all the rest seemingly culminates into or points toward. It has been considered ‘divine communication’ by some and ‘trafficking with the devil’ to others – but regardless of the view taken, the knowledge and experience of these crossings is never held without some regard, for better or worse!

In 2009, the Mardukite Chamberlains began releasing their underground publications as part of an extraordinarily extensive version of what many people’s debut into the realm of Mesopotamian esoterica had been – the NECRONOMICON.

The original versions of the 2009 ‘Mardukite Core’ were all elaborately designed limited edition handcrafted tomes that later only appeared in the consolidated anthology titled ‘Necronomicon Anunnaki Bible’. It consisted of the ‘Necronomicon (of Joshua Free)’ (Liber-N) in June of 2009 and three subsequent titles, ‘Necronomicon Liturgy & Lore’ (Liber-L), the ‘Necronomicon Gatekeeper’s Grimoire’ (Liber-G) and the ‘Nine Gates of the Kingdom of Shadows’ or ‘Necronomicon Shadows’ (Liber-9).