SEXUAL MAGIC at an Outer Circle level (meaning what is publicly available) is called “Black Tantra” or simply sex magick. Practices promote ritual use of sexual orgasm and its fluids to raise and direct personal energy. As we are to find out when we roll the dice at the NINTH GATE, Black Tantra is the path back down the Serpent’s Tail, leading us away from experience of the Highest spirituality.
—Joshua Free in CYBERNOMICON

RED MAGIC merges sex magick with ceremonial attainment of occult power. Vampyric Rites of Starfyre intentionally charges the fluids of the body, which carry personal genetic material (DNA). This includes saliva, semen and vaginal sweat representing the White Dragon, Blood is necessary to balance the Red Dragon current-stream. Menstrual blood is one of the only materials powerful enough for these rites (due to its hormonal charge) representing the sacrifice of virginity.

Magicians engaging in sexual practice will involve their mates into their energy work. This is natural. By pairing with their mate, they attune to each other—the vibration frequencies meet in a mutual pool. Everyone has this happen to them, but that’s like saying everyone breathes so everyone is a master at yoga and meditation (which is not the case).
–Joshua Free in CYBERNOMICON 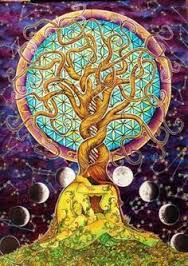 Spiritual Master, Samael Aun Weor speaks to his students in “Light From Darkness: The Practical Science of Spiritual Awakening” about the explosive power and dynamite explosion involved with the practice of Red Magic—that it can be quite dangerous or energetically destructive if not handled appropriately. Druidic Master, Douglas Monroe, describes quite the same principles from the philosophy of the Pheryllt Druids.

Very deeply analyzing the astounding power of sexual energy, we arrive at the conclusion that it is extraordinarily volatile and very difficult to store and control. Sexual energy is like a deposit of dynamite; its presence signifies a formidable source of tremendous potentiality, and also a constant danger of a catastrophic explosion.

The sexual energy has its own channels of circulation, its own organized electrical system. When the sexual energy infiltrates the mechanism of other functions, it can produce great explosions, tremendous biological, physiological, and psychic catastrophes.

Violent and destructive types of manifestations of the sexual energy are generally derived from certain negative psychological attitudes towards sex. Sexual suspicion, fear of sex, sexual prejudices, the cynical, brutal, or obscene sense of sex, etc., obstruct the channels whereby the sexual energy circulates, and therefore the sexual energy deviates and infiltrates other channels, systems, and functions where it produces frightening catastrophes.”

The Ninth Gate or Ninth Kabbalistic Sphere is Yesod. Yesod appears to vibrate at the same frequency as sexual organs, when depicted on the Kabbalah of Man. This means that the key to accessing the Ninth Gate is embedded in human sexuality. This is also depicted in the film, “The Ninth Gate” starring Johnny Depp (based on the novel “Club Dumas”). At the end of the movie, his character accesses the Ninth Gate through sexual intercourse with the scarlet lady BABALON (or LILITH), green-eyed red-haired Lady of Night…

THE DARKEST SIDE OF NIGHT… Vampires have a very unique place in human consciousness. Understanding how it got there requires visits to old dusty libraries and days spent with even dustier volumes. By definition, History, is contained within writings. Everything else that archaeology discovers is subject to interpretation – usually using the same aforementioned writings. 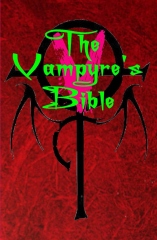 Tracing Vampires through history is not difficult. There are key periods of time when, for some reason, Vampires are just everywhere. THE VAMPYRE’S BIBLE will inform the reader (who is presumably already a Vampyre or a fledgling BabyBat) in mastering the art of energy transformation and vampyrism.

[This blogpost officially excerpted from THE VAMPYRE’S BIBLE by Joshua Free.]

Using the writings of various periods, the evolution of Legendary Vampires and Living Vampyres today, it is actually quite clear. From central Europe, the “Traditional Vampire” is described in magical lore and folklore as the upyr, from the Latinized uampire. Later usage by Germanic languages included a “V” – vapir and vampyr. After this, the letter “V” by itself, subconsciously starts representing Vampires.

Darksider genes, diseases and conditions appear to connect traditional Vampyric origins in Mesopotamia and Egypt. This very rare sequence of conditions appears most often among “strict” bloodlines, citizens of the court, “blue-blood” royalty and even a few nomadic groups that spread across Eurasia.

Heightened psychic or psionic sensitivity and an elevated energetic metabolism requires certain individuals to channel and process significantly higher levels, magnitudes and frequencies of energy than what is “normal” for the “human” condition. Energy Vampyres are “wired” to maintain the balance and flow in the Universe. They Feed on Etheric energies as a form of photosynthesis.

Anemic porphyria is a very common blood condition among Living Undead. Porphyria is the Greek word for “purple.” The disease is named for the color found in urine and feces. Other common symptoms include: visual and auditory hallucinations, seizures, and finally, the classic acute light/sunlight sensitivity of the skin and eyes.

Anemic Porphyria can remain genetically dormant in the blood system indefinitely until activated by some triggering condition – whatever that may be. Among general populations today, 1 in 200,000 people (5 ppm) have this condition. Modern medicine treats this with heme injections, but in prior times, self-medication might have included drinking blood. (Heme can be absorbed into the bloodstream through the stomach lining.)

Pellagra is a “wasting” Darksider Disease. The earliest symptom is hypersensitivity to sunlight. Then, as brain neurons degenerate internally, erratic behavior results including dementia, insomnia, mood swings and violence. This condition is triggered by niacin and tryptophan deficiencies from sugar-rich diets (or diets overdependent on corn and corn syrup).

Werewolves, another Creature of Night, do not share the same sensitivity to sunlight that occur with Vampyric conditions. In the near future, as everyone seems to be expecting anyway, we can expect a widespread rabies-like virus epidemic. It is as yet to be undiscovered, currently being engineered or already sitting on a shelf just waiting to leak out. Unlike genetically carried conditions, this externally introduced agent will interact with each person differently – based on heredity, willpower and intelligence. Rabies changes physical appearance, personality and behavior. The inevitable final result in death…

The Vampyre’s Bible: A History of Children of Night and Guide for the Living Undead