Sumerian Religion 2: Secrets of the Anunnaki in Babylonian Mythology with Joshua Free

Sumerian Religion II… The sequel to the most critically acclaimed bestselling materials from the Mardukite Research Organization – Arriving on the surface world from the underground – an amazing insight into the Anunnaki ‘alien gods’ and the establishment of human civilization famously accounted by the Sumerian and Babylonian traditions.

“Grounded on a rough foundation – mainly rooted in Arcanum and Book of Elven-Faerie, texts I spent 2004 through 2008 preparing – I founded the public efforts of the ‘Mardukite Research Organization’ in 2008, not really knowing what would happen; at least not for certain. Of course… I had an idea – a plan – very elaborate and composed of countless phases and correlations of other efforts… but would I actually be able to see it to fruition? So many years later… it is amazing what we actually did accomplish…” — NABU, Joshua Free

In the much anticipated follow-up to “Sumerian Religion: Secrets of the Anunnaki & The Origins of Babylon” (Liber 50), Joshua Free, a world renown authority on the Anunnaki, completes his presentation of this topic as the modern world has never before had access to, developed from the revolutionary work conducted by the next generation of Seekers actively using a revival Anunnaki tradition drawn from the ancient cuneiform tablets of the Sumerians and Babylonians in the present day.

“Sumerian Religion II: Secrets of the Anunnaki in Babylonian Mythology” is not merely another dry academic rendering of obscure history; Sumerian Religion II will continue your progressive journey into the heart of Mesopotamian Mysteries that is just as relevant and critical today as it was thousands of years ago! Sumerian Religion II is the perfect practical companion to the study and practice of any and all systems as it displays the prehistoric origins of human traditions and the development of civilization on the planet, a fundamental truth that everyone can benefit from.

Originally designed and released in early 2011 exclusively underground for the Mardukite Chamberlains as “Liber 51”, this amazingly new revision of the classic tome stands alone – unique as it is practical – revealing the influential evolution of the Anunnaki “ancient alien gods” of Mesopotamia (Sumerian, Babylonian, Akkadian, Chaldean, Assyrian, etc.), which the public has previously only known through nearly insubstantial communications or else pop-culture presentations that provide few answers and appear to capitalize on the unquenchable curiosities of the masses.

“The work of 2009 is now solidified as the primary ‘Mardukite Core’, a revival of the most ancient system on the planet, that of the ‘Mardukite Babylonians’, drawn from the ancient cuneiform tablets and compiled for modern purposes in the Necronomicon Anunnaki Bible – and now, also in the 2009-2010 mega-anthology: Necronomicon Anunnaki Legacy (Silver Edition). This ‘core’ work and the later efforts added to the core (now compiled in the 2011-2012 mega-anthology Necronomicon Gnosis: Anunnak Legacy Gold Edition) are all dependent on one key aspect to be understood or even used by modern revivalists and esoteric practitioners: the Anunnaki.” — NABU, Joshua Free 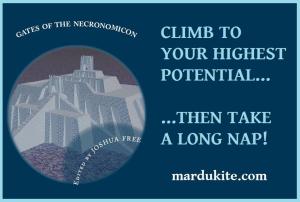 Sumerian Religion II is unparalleled in displaying the post-Sumerian mystery tradition of the ancient Babylonians, now accessibly comprehensible to any seeker for the first time in modern history. Revealed within are the very methods by which Babylon rose to power from seemingly prehistoric nothingness and how these very real systems born in the Ancient Near East are still with us today!

This highly innovative work drives the emphasis home that memory of past and future are one, and uncovering the truth of yesterday will provide a stronger tomorrow! Uncover the mysteries that lay hidden in ancient Sumer, with a message so relevant today, it is no wonder it became the greatest kept secret of Babylon!

One comment on “Sumerian Religion 2: Secrets of the Anunnaki in Babylonian Mythology with Joshua Free”