Sudden underground emergence and attention to The Book of Sajaha in 1991 reminded us of our own modern construction of an ancient wisdom tablet series — Book of Marduk by Nabu — which was entirely the development of the internal ‘Mardukite Chamberlains’ in 2009 and 2010, styled in the likeness of a ‘Prayerbook’ as might have been kept by the priests and kings of the Babylonian (Mardukite) tradition. And, of course, by “book” we mean a series of clay cuneiform tablets that could later be considered a “book” if and when converted to a bound paper medium, such as what we now produce for our readers. 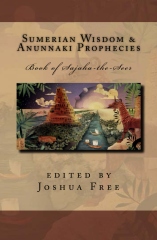 The following is a sampling of the tablet translation provided in the Book of Sajaha the Seer available in Liber S from the Mardukite Research Organization titled: “Sumerian Wisdom & Anunnaki Prophecies“

THE SAJAHA SERIES – TABLET I

1 Sajaha – My king, as you already know, there are vibrations and energy flows of different types and strength; everywhere and in everything and in everyone.

2 For everything and also for all people, there exists a permanent force in a sea of cosmic and magical vibrations and energy currents; equal to a large lake, which is composed of many different seas in itself.

3 And so everything emerges from and everyone experiences reality from oceans of vibrations and energetic flows that incessantly emits a field and also reproduces by itself; but without ability to determine anything about any of these things – often without even noticing.

4 It is participation in Games of vibration and energy currents that challenge everyone to maintain a high degree of purity to remain close to the Source of All Being – the All-as-One – from which people have become almost entirely lost since the demise of the original empire. And the intermingling descendants lost most of the old power.

5 It has come to be – in times being what they are – especially in that which pertains to the subtle vibrating Force flowing unobserved, that powers are directed only to a small extent of their potential, never really mastered or used conveniently.

6 This resulted due to the nerve-qualities of the ancestors, necessary for mastery of high power – Divine Right on Earth – being diluted among the descendants today and the pure descendants of these forces are no longer among the population.

7 The primary tool still in possession for you to still channel vibrations and energetic currents remains: the long hair of women. As such, women may become seers to divine knowledge otherwise hidden.

8 This now means that most people can not handle magical currents, although they are in the middle of them, and therefore they are like rudderless boats on an unknown sea.

9 Why should the few those capable to use their assets to keep the many other groundbreaking lights in the silent invisible sea. (The vibrations of the forces of nature are regarded as male, however the magic as female.)

1 Sajaha – Much has been, much will be, and in between what has been and what will be coming, is the kNow.

2 But this kNow is but always only a half-breath, and there is no scale by which to measure it.

3 MARDUK, surveyor of everything, who added to the people’s knowledge, the kNow, the power of eternity-in-infinity.

4 MARDUK sees the beginning and the end. In between, he sees the people on earth, they can not believe what they behold of the gods.

5 The people are the shadows of the gods. They act at their own discretion on earth. Their inheritance in the Light is to blame; for it is the seed of Darkness.

6 MARDUK sets forth the way of the walking for the Seekers. Choose your path and guide the people.

7 The compassionate eye of MARDUK gazes upon an erring race, creation of the gods. He shines upon the right way to go. He gives advice only. The Seeker is never forced on the path.

8 This is now the way of things – a way best likened to the spider’s web. It is always difficult to find only the most direct path.